A Kiss in Time- Review 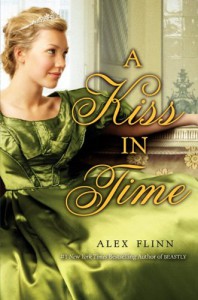 Overall, I have to say it was somewhat entertaining and at times slightly far-fetched. So if you go into this story with the intention of being entertained, you’ll enjoy this book. However, if you’re looking for a re-telling, that’s where some might be disappointed and slightly underwhelmed.

Many might call the protagonist Talia pretentious, precocious and quite immature, and Jack somewhat weak and lost, but if you give them both a chance, you’ll be pleasantly surprised by their character growth at the end of the novel.

The majority of this story takes place after the kiss. Interesting enough though, Flinn decides to have the princess sleep for over 300 years, waking the entire kingdom into the modern world where love at first sight, jealousy and curses take on a whole new meaning. So let me focus on those aspects I found interesting.

Flinn takes a whole new approach on the curse. If you remember, the King and Queen simply failed to invite Maleficent to the celebration of Aurora’s birth and because of that Maleficent casted a curse over the baby. Well in A Kiss in Time being snubbed by the King and Queen was not the sole reason for Malificent’s or in this case Malvolia’s curse. There was more to it. A deep seeded revenge on the King, which you’ll have to read to find out.

Also, the curse specifically stated that on her sixteenth birthday, before the sun sets, she will prick her finger on the spindle of a spinning wheel and die. Merryweather was unable to undo Maleficent's curse but rather only able to weaken it. The curse didn’t say “might prick her finger” or “could possibly prick her finger” it was destiny/fate for the princess to fall victim to the curse. So hiding the princess away or burning all the spinning wheels in the kingdom wouldn’t help, it was inevitable. It was interesting how Flinn spun that aspect in her story.

Lastly, when the fairy sought to lessen the curse, she said that the princess would awaken by “love’s true kiss.” In A Kiss in Time I got the impression that Flinn doesn’t believe a merry dance by the meadow between two strangers constitutes “true love” so in her retelling, she makes these two character go through a lot more to prove they truly love each other.

All pretty interesting when you change the cast; add a few more gifts by the fairies; really pay attention to the curse; extend the sleep by 300 years; and force the knight in shining armor to do more than cut some weeds and slay a dragon to prove his love.

Overall, I will have to say it requires a substantial amount of reality suspension, but don’t all fairy tales?? Fun retelling, that is either a huge hit or miss for YA readers. I enjoyed it enough though.